So Ceri 'Creativity Extraordinnaire' Williams (also know as "Diva Williams" and "Ceri Close-Up"), messaged me on the 11th March to ask if I was maybe about for the whole weekend on 6th and 7th April for the SFL 48hr Challenge...

... and I was and I couldn't think of an excuse quickly enough so...

Other than some concerns over how well I would be able to operate the camera with only one hand, I was pretty keen and had done some work on Ceri's previous short-film 'Strings' under the direction of a more experienced - and by that, I mean has any experience at all, whatsoever - cameraman, Jon Boylan.
(Blog to come on Strings, another of Ceri's 'Flashcards' projects, as soon as the short-film is finished!)

So on the 5th April, I'm reading through the callsheet to make sure I've got everything, the batteries charging, I've cleared all my memory cards, my bags are all packed and I see on this sheet:

"DOP: Chloe Isherwood"
(that's 'Director of Photography' for the unfamiliar)

... and, for someone who's a little nervous about ruining ALL Ceri's, and the rest of the team's, hard work... this sent me into some pretty bigtime, pre-shoot jitters...

Back at 'headquarters', props, locations, scripts, recording equipment, times, everything was being organised and planned and the team were buzzing around getting as ready as we could before the brief was released on Saturday morning and here I was about to ruin EVERYTHING because I was RESPONSIBLE for ALL OF THE CAMERAWORK....

... all night.
And then out of nowhere, it was a lovely, bright, Saturday morning and I had a text from Ceri and she was on her way to pick me up and I was up, washed and dressed and outside the house waiting and I was thinking - "Erhmahgerd. Herlp."

But instead of help came Ceri, in the car, smiley and expectant of competent camera operation. 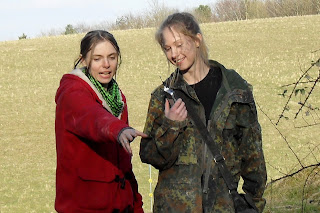 Let me start by introducing Ceri's carefully chosen team for this magical project:

The team was split into two. One team (1st unit) were off to film the visuals and sound on location with Gemma. The other team (all the 'voices') were off to London to sort out some scripts and get recorded! In fact, by the time we got to Gemma's house for costume, make-up and briefing, some of the 2nd unit had already long been in London getting started with set-up.

We received our brief at about 12pm, I think, which was...
Title: A Special Announcement
Dialogue: "I'm afraid to engage in interactions that I don't know how to control."
Prop: A padded envelope

So, we (1st unit) got to site at about 1pm and started filming the end of the film first. Naturally.


The end of the film, or 'the paperwork scene' as I'm referring to it... I'm not going to tell you about as it will spoil it for when you watch it (if you haven't already seen it), but we filmed it a couple of times from approximately 10 different angles to see what worked best and for the most part, we were off to a pretty awesome start actually. 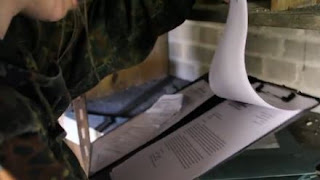 We then went on from there to film Gemma's ascent up the stairs and her walk along the chimneys... 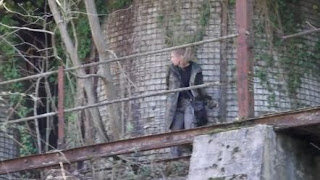 ... and then from up there, we filmed the wide shots of Gemma walking around some other parts of the site.

I filmed the entire short at 25fps and using a custom filter that I have set up on my 7D (that effectively whacks the contrast right down from the point of filming amongst other things). You can create your own custom in-cam filters and settings using the Canon software and it's actually pretty handy for this sort of thing. I obviously want my filmed images to look completely different and so having this set up allows me to do both without too much fiddling.

We filmed, I think, for a total of only about 4-5 hours (with a very small 5 minute break to wolf down some sandwiches that Ceri had lovingly made)... 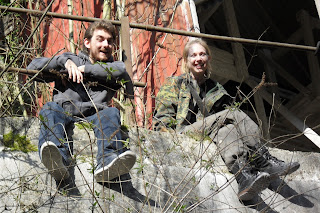 Alex and Gemma enjoying the sun for a brief moment!

...and all-in-all I had a great time all day filming from various angles on an absolutely wicked site and my only complaint really was the inability to focus effectively with the broken hand!!!

On the other hand however (pun intended) I did manage to climb two difficult obstacles with one hand and with a dodgy hip so I was pretty much a machine that day. XD

Also, in the final cut, a few of the focussing issues actually worked rather nicely.

Now then, towards the end of the day, Ceri was watching the first take of Gemma climbing up and then back down the metal stairs when it suddenly hit her that Gemma had meant to be holding the little hand-radio pretty much the entire time we had been filming.

When Ceri arrived on site, whilst she was waiting for the second car of people to arrive, she was scuffing up the radio and then put it in Gemma's bag ready for filming... where it sat forgotten and alone for the best part of the day...

So, Phil suggested an additional 'camping' scene to show Gemma tuning into the radio so that it is implied that she has been tuning into all of these broadcasts that you're hearing during the film.

This, if we could get it done, would obviously fix the issue. But just for the sake of covering all eventualities, we popped the radio into as many scenes as we had left and included it in some pickup shots (such as pulling items in and out of the bag) and such. 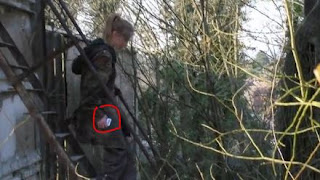 Anyway, by the end of the day, when it started to get darker, we headed back homeward at this point to find that it was actually too dark to get the camping scene we wanted when we got back. At this point, Ceri, Gemma, Phil and I decided to do this final scene and any last-minute pickups the following afternoon.

On the Sunday, after a gruelling night for Ceri, Andrew and Phil who had already been putting the footage together, we headed out to another derelict location at about 5pm for the 'camping scene' where we had Gemma tuning into the radio. 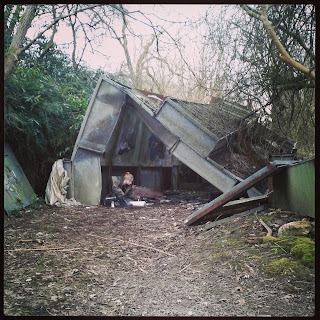 We had Gemma tuning into the radio, studying her map, making plans, tuning into her radio again, getting stuff out of her bag, putting it back, etc for about an hour (sorry, Gemma) and filmed it from all different angles...

I really enjoyed filming although, admittedly, I was still a bit worried about the outcome having no real cinematography experience but there were a few bits and bobs in there that, looking back at it now, I am mental proud of. :)

So, here's a link to the film:

'A Special Announcement'
By 'Project Flashcards'

Please enjoy it!
Interesting facts:
The dropping of the radio scene: The radio was dropped in the first location (4:43) and smashed open in the second location (4:45). The two locations being 15 miles apart!

The map: The map was just a massive map of the Brecon Beacons in Wales!

Corridor scene: In the scene where Gemma is walking down the little corridor 'following' the camera (2:09), Ceri had to pull me backwards along that route while I filmed it so I wouldn't accidentally suffer a crippling 10ft drop!

Metal stairs scene: When first filming this scene, Gemma didn't realise the second half of the railing was not attached to the stairs and had a bit of a near-death experience when she tried to lean on it!

Mood contrast: Despite the mood of the scene being angry, Gemma and (embarrassingly) myself, spent an unhealthy amount of the old electronics smashing scene with 'Pocket Full Of Sunshine' in our heads. It;s a dreadful song. Don't search for it. It's not worth the hassle.

Song: The song heard at 1:54 seconds and again at 2:24 was composed and recorded in just 24 minutes!

Paperwork: At 3:40, the paperwork scene, all of this paperwork, other than the headers and footers where all default 'Lorem ipsum...' script which is actually why this shot is taken as if 'browsing' with Gemma...

Camping scene: Even though the camping scene was not used in the final cut, when Gemma was tuning in during filming, she found an actual radio station playing Taylor Swift... she was very happy about it and it was an excruciating couple of minutes.

Exit scene: The final scene (4:55) is from the second 'Sunday' location again and Phil was VERY particular about where all the rusty metal objects were placed so I'm very pleased 'his shot' got used. XD

Product placements: Tesco, Sharpie, Jiffy... see if you can spot them. We're expecting money and/or free stuff from each of them soon. :)

... and here are most of the team enjoying a meal on the Saturday evening after the first hard day's work...