I had an idea for a striking set of portrait photos of Wayne KC of NOIR Photography so we discussed it and met up one evening to give it a go.

Now I may have suggested to Wayne that these were only ‘portrait shots’… I didn’t mention that he’d be wearing dramatic make-up, gaffa tape, a leather collar and a long black skirt but sometimes, it’s better to keep these things to yourself rather than scare off your subject…

So I turned up with all my gear and set it all up. We used Wayne's background for ease as it was readily available and I sat him down and got started with his eye make-up. A nice set of smoky-black eyes, mascara, black eyeshadow, blackened eyebrows… you get the picture (you really will in a minute).

Next, I cut said gaffa into thin strips and positioned them around the lower eye in what I can only think to describe as a Clockwork Orange, owl-like manner.

He put the skirt on rather like a poncho and I put the leather collar (which is actually a leather cuff) around his neck and gaffa’d it to stay in place. It was at this point I realised that Wayne trusts me too much.

We took the first set of images from varying heights and angles. This straight on shot being my favourite of these: 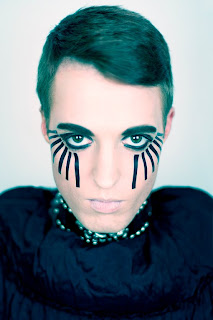 This effect was achieved with the colour balance too on all the blacks only, giving it a sort of teal green radiance.

Next, we took off the skirt-poncho and leather cuff and gave Waynie some lover-ly black lips to balance out the darks and lights a little. I got him to take his shirt off as is customary in my shoots (I really do promise that it’s not) and got him sticking his elbows forward to bring out those gorgeous collar-bones and really step up the androgynous-ness… ness… 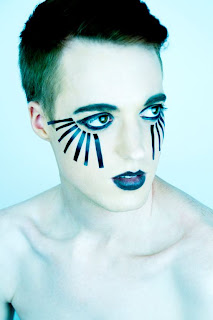 This time, the effect was achieved using a cyan 'variation' but this time, the whole image for a more alien look. Ooh.

Funny story: Wayne once dressed up as a girl on a night out and very nearly got hit on by a guy he knew. They were mortified.

That being said… he does look surprisingly good as a girl. Not only could he pull it off but he could pull it off better than a lot of actual girls…

A bit of an Andrej Pelic. 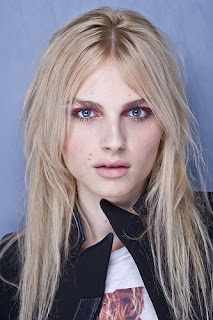 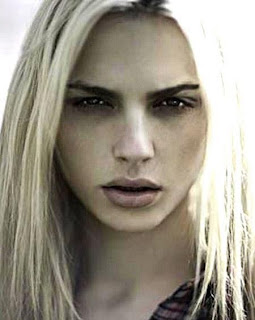 Anyway, my thanks to Wayne for letting me attack him with black leather and gaffa tape. Especially as I’m a girl (otherwise I can’t see how it would have been a problem…)